The third OPG (Original Parma Girl :)) and my final Texas roommate, Megan, came to visit the first weekend in October. She got here in time for a late lunch on Friday and flew back to Dallas Sunday morning, so it was a pretty quick trip! We managed to pack in plenty of fun, though.

My Madam Secretary-watching friends know this as “where Henry writes sometimes.” 🙂

After lunch at the 24-hour diner down the street from my apartment, we took the metro to the Archives station and then walked to the International Spy Museum. 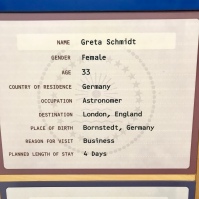 When you first get into the actual museum, you are instructed to choose an alias and memorize the information because you’ll “need it later.” We didn’t know it at the time, but Megan and I both chose “Greta Schmidt” as our new identity. After choosing our new name, we watched a short video about the history of spycraft (which now has me super suspicious of everyone I meet here) and then entered the first exhibit.

There is SO much to see and learn at the spy museum! At one point, we crawled through an air duct to spy on the unsuspecting tourists below. We were excellent at staying in the green on the noise meter until a group of rowdy kids came in behind us and jacked that thing up to the uppermost red level. Boo.

Along the way, there were two or three computer checkpoints where we were asked questions about our aliases. This was a little disappointing because we were expecting to be stopped by real people and quizzed or something. Neither of us passed our exit questionnaire, though, so apparently we don’t have futures as spies! LOL.

We walked around a bit after leaving the museum, and then we grabbed pizza from the place below my apartment before starting season 3 of Quantico on Netflix. 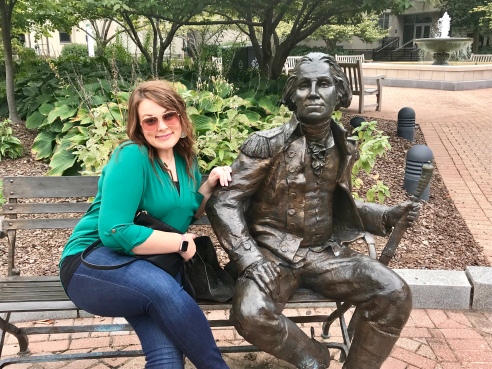 Saturday morning we stopped by campus so Megan could get a GW t-shirt for her school’s college shirt day. While we were there, we took the requisite pics with George Washington himself. 🙂 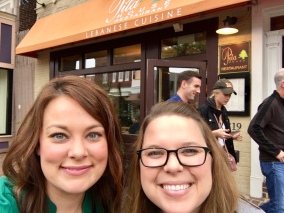 After GW, we went on a food tour in Old Town Alexandria. We ate some good food and then finished with some fantastic desserts! The tour lasted around three hours, and then we went back to Gadsby’s Tavern and took a tour there. It was really cool to see one of Washington’s hangout spots! Old Town has some fun shopping options, so we walked around a bit before taking an Uber back to my apartment. We promptly switched into our pjs and watched three or four more episodes of Quantico. (We are nothing if not committed.)

Sunday came too quickly. We took the metro to the airport and said a quick “see you later!” before parting ways. I made it to church a few minutes late and then had two meetings after, so I didn’t get home until after 3:00. It was a whirlwind of a weekend, but it was worth it!

You could make this place beautiful,